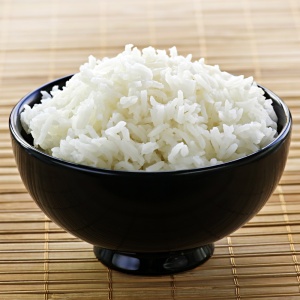 I once ate nothing but rice for three days. It wasn’t a diet or a fast; I was broke. I had managed my money poorly during the previous weeks, and work was scarce to begin with. Finally, I got up one morning, peered into my wallet and found nothing there but lint. My next paycheck was a week away. After eating every package of Top Ramen I could find (some of them stuffed into the backs of kitchen drawers), harvesting every stray can of soup in the cupboard and even eating the last of the peanut butter with a spoon, I was left with a tub of long grain white rice.

It wasn’t bad at first: I had some butter left, about two servings’ worth. I cooked up a cup of rice, put a dollop of butter onto the white mound in the bowl, added copious amounts of salt and pepper, and took it down the hatch. I actually felt somewhat full afterward. That was lunch. I repeated the procedure for dinner, using the last of the butter, which I scraped painstakingly out of the tub to get every last fleck. Again, I felt fairly full, partly because I drank plenty of water with it. I had read that drinking water helps stave off hunger pangs.

Then, the second morning, there was nothing in the house but rice. No frills. No Cream of Mushroom soup or even stale margarine to make it stick to my ribs. I cooked two cups, spooned it out into a small mixing bowl, added salt and pepper, and ate it. It felt like I was eating sawdust, but it took the edge off my hunger. The hard part was that I still had most of a week to get through before I got paid.

Of course, I had other options. I could seek public assistance. I could call my mom or just show up at her house; she would surely feed me, even if she glowered at me first. It wouldn’t be the first time I’d behaved irresponsibly and then come knocking on her door. I could have done all kinds of things that would have been more pleasant than eating plain white rice for three days. But I was starting to see the error of my ways. I knew that painful consequences have a way of stamping in life lessons. Especially hard-headed people (I am one) often cannot change without a term or two in the School of Hard Knocks. I knew there was something fundamentally wrong about someone blowing all his money and then skipping along like nothing happened, perhaps with a food stamp card in his wallet or a bag of groceries from Mom ― food she had worked to pay for. I couldn’t bring myself to take the easy way out, no matter how much my stomach grumbled at me. And the grumbling grew worse and worse. By the third day, eating the rice seemed to make no difference at all. I would eat a large bowl, and my body would say, “So when’s dinner?”

Then I remembered Mother Lawrence.

I had heard about Alice “Mother” Lawrence years before, when the Anchorage Daily News ran a story about her food pantry and homeless ministry. It was an astonishing story about a black woman in her 40s who, almost on impulse, decided to start knocking walls out of the modest home she shared with her husband. The space became a small church where she held two weekly services and handed out food, blankets and clothing and, on occasion, put people up in their home.

Mother Lawrence explained in a KTUU news story in 2012 that she had watched an acquaintance of hers suffer when her husband “ran off with another woman…There was no place for the wife, for the mother, to go with kids to get any food. So I said, ‘Once I get on my feet and get married again, I’m going to make sure there’s a place for women with children or men with children’ ― that’s really why I started this.”

She continued her ministry for the next 40 years, even after a windstorm tore part of the roof off her house, threatening to render her as homeless as those she’d tried to help for 40 years. At the same time, the van she used to pick up groceries was falling apart, while she could barely pay the mortgage and utility bills. She reported having had all her operating money stolen twice by roving thieves. “Sad, because they could’ve asked,” she said about the thefts.

The day I met Mother Lawrence, I was standing in my living room, having just finished my final bowl of rice. I had barely been able to force myself to eat it. Then I picked up the phone book.

I don’t remember how or why I remembered about Mother Lawrence. It could be that her name just popped into my head. I happened to be living in Mountain View at the time. Her house was within walking distance.

“Mother Lawrence?” I asked into the phone.

I told her my ragamuffin tale, conveniently leaving out the part that I had blown all my grocery money the week before. It probably wouldn’t have made any difference anyway. When I got to the part about eating nothing but white rice for three days, she scolded me:

“I’m going to beat you with a pillow!”

I had just met the woman two minutes ago. On the phone.

I walked to her house, which was a dozen blocks or so from my apartment. She was standing in the doorway when I arrived, dressed in a well-worn skirt and a sweater, both with bright orange and red hues, overlaid with a maroon scarf. We made eye contact, and she gave me a big smile.

“Here’s what we have left,” she told me as we walked into the house. She indicated some three day old pastries, a few loaves of white bread, cans of beans, and some wilting produce.

She gave me a faded cloth bag, and I loaded it up with whatever I could find. I looked around at the interior of the house as I browsed, remembering the story I’d read in the paper.

“You be sure to come back Wednesday at 10 o’clock. That’s when I get the meat in.” She stood on the stoop of her house as I looped the bag handles over my fist for the walk home. We just stood there looking at each other for a moment. I imagine she saw gratitude in my eyes, but there was something more: I had met a woman who was famous here for all the right reasons. Now I was a part of the story.

“Yes,” she said rather softly, with a bashful expression of pleasure on her face.

I hugged her, waved and left, only to come back two days later for more food. That was the second and last time I saw her.

I was talking about Mother Lawrence with a friend yesterday, and the talk came around to a pertinent Scripture, in which Jesus is having a conversation with his disciples about food. Only, he meant a different kind of sustenance: “My food,” said Jesus, “is to do the will of him who sent me and to finish his work.” (John 4:34)

Though she handed out food of the physical variety, I suspect Mother Lawrence ate more of the other kind in her life. And she managed to teach the lesson to an irresponsible thirty-year old in the process, on a cold Anchorage winter day.

And I am thankful.

I am a freelance writer by trade, philosopher and comedian by accident of birth. I am an assiduous observer of humanity and endlessly fascinated with people, the common elements that make us human, what motivates people and the fingerprint of God in all of us. I enjoy exploring the universe in my search for meaning, beauty and friendship. My writing is an extension of all these things and something I did for fun long before I ever got paid. My hope is that the reader will find in this portfolio a pleasing and inspiring literary hodgepodge. Good reading!
View all posts by Douglas Abbott →
This entry was posted in Giving, Uncategorized and tagged charity, clothing, feed, food, generosity, giving, God, help, homeless, hungry, Jesus, kindness, love, mercy, ministry, Mother Lawrence, shelter, spiritual food. Bookmark the permalink.

2 Responses to A Thanksgiving Tale