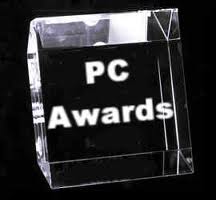 I was at work last night when I committed a great breach of decorum. I told a co-worker, “God bless you!” Another co-worker was nearby and repeated my statement derisively. “God bless you?” she said, shaking her head. (She is apparently an atheist.) Her tone was what I would have expected had I said, “May you be attacked by a knife-wielding maniac.” Perhaps I should have said, “May God fail to bless you.” But no, that still acknowledges the existence of God. Perhaps, “May it be hereby settled that there is no God, leaving you without a blessing.” No, that’s negative. How about, “May random environmental forces fall together in your favor.” There! That should do it.

I’m glad to say I didn’t display a trace of the indignation I was feeling when this exchange occurred. I reflected afterward that my irritation might be unwarranted. After all, it isn’t likely this woman understood what she was dismissing. She is a lesbian, which places her in the middle of the war between Christians and secularists. This cultural conflict has been raging for so long in America that most of us go around with inner sores. We have grown so weary of the opposition’s screed that we wince inwardly whenever we hear it. Hence, while my words were intended to uplift, they merely rubbed a raw spot inside of this woman. 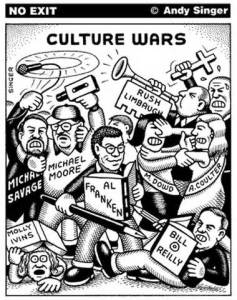 So how did the mention of God become so onerous to so many people? The answer to that question has many layers. On the surface, there is the political tension in the culture. For this woman, any reference to Christianity reopens the whole can of worms regarding her orientation, which is an ever-contentious issue — probably the most divisive subject a person can bring up today. For the part of Christians, we have mounted a herculean effort to bend the culture to fit our beliefs. It doesn’t matter that many of us have resisted doing this. For all the disunity in Christendom (tens of thousands of denominations, sects and dogmatic approaches), those who are hostile toward Christianity tend to consider all Christians representatives of the ugliest facet of the Church. It is almost as though unbelievers, upon hearing a confession of faith in Christ, point at the person and say, “You’ve been bombing abortion clinics, haven’t you?”

It doesn’t help that we have self-righteous demagogues like Fred Phelps (RIP) and his acolytes who use the Bible like a bludgeon and keep stirring the cauldron. It all happens under the banner of Christ, including the various other kinds of evil done by people and organizations who call themselves Christian. Many of these actually believe their motives are pure (John 16:2). To make matters worse, God does not go around zapping people just to prove he wasn’t the one who told them to do it.

For the part of unbelievers, I would submit that never in the history of the world has common secular thought been more incompatible with biblical principles. There is an unprecedented celebration of self-determination in the world today. It is so deeply embraced by Western culture that God and Christianity are rendered irrelevant because of the way people think. Some would argue that God’s way has always been foreign to those who haven’t yet been converted. And they would be right. But there is a new, pernicious element in place today: the idea that each individual’s understanding, no matter how discordant with reality and the world at large, has unassailable validity. If a person is unable to admit he is wrong, what incentive is there to change?

As abhorrent as postmodern ideas are, they are simply a variation on a theme that has been playing for the last 6000 years: Go away, God. We don’t want you, we don’t need you, and we don’t much like you. It is the same disease we all have — only, in some of us, the disease is in remission.

“As for you, you were dead in your transgressions and sins, in which you used to live when you followed the ways of this world and of the ruler of the kingdom of the air, the spirit who is now at work in those who are disobedient. All of us also lived among them at one time, gratifying the cravings of our sinful nature and following its desires and thoughts” Eph. 2: 1-3

The hostility I am experiencing isn’t against me, it’s against Jesus. The only thing separating me from the rest of the world is a unilateral act of the Holy Spirit. In light of all this, I have come to the conclusion that my unspoken reaction to the lesbian co-worker was prideful. What rankled me about her attitude wasn’t just her hostility toward God, but also her smugness about Christianity’s fall from respectability. As an ambassador of Christ, I ought to labor against these things, but to chafe under it indicates I am suffering from pride. My ego aches to prove to her why, according to the very secularist rules she embraces, she doesn’t have a leg to stand on.

The alienation from God that is underneath all such hostility is impervious to logic, which is why it can’t be done away with by argument. It can only be reversed by love, which is 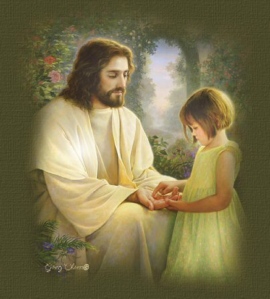 patient and humble and non-combative. Through the course of thinking this issue through, I have rediscovered the best possible reason for speaking and acting with prodigious gentleness:

“Always be prepared to give an answer to everyone who asks you to give the reason for the hope that you have. But do this with gentleness and respect, keeping a clear conscience” 1 Peter 3: 15-16.

I am a freelance writer by trade, philosopher and comedian by accident of birth. I am an assiduous observer of humanity and endlessly fascinated with people, the common elements that make us human, what motivates people and the fingerprint of God in all of us. I enjoy exploring the universe in my search for meaning, beauty and friendship. My writing is an extension of all these things and something I did for fun long before I ever got paid. My hope is that the reader will find in this portfolio a pleasing and inspiring literary hodgepodge. Good reading!
View all posts by Douglas Abbott →
This entry was posted in PC Awards and tagged free speech, God, liberal, PC cops, political correctness, radical liberal, radical liberalism, religion, secularism, workplace politics. Bookmark the permalink.

2 Responses to An Unwanted Blessing