“Westboro Baptist Church targets Taylor Swift,” the headline read. The article had a flavor of outrage, and rightly so. Fred Phelps, WBC’s leader and tireless purveyor of damnation, is at it again. This time, as chronicled by Pop Spy’s Jennifer O’Dell, Phelps’s acolytes are up in arms about Swift’s “ ‘immodest, vulgar’ public image, her position as a ‘serial fornicator’ who ‘works her girl-next-door country-singer shtick while hopping from one young man to the next and strutting across the world stage like a proud whore.’ ”

As a preliminary measure, I have to question where WBC obtained warrants to peek into Swift’s bedroom window in order to gather evidence of her fornication. But that’s beside the point. 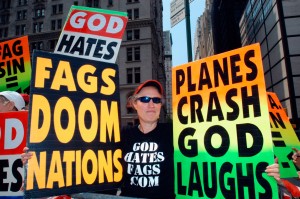 As most of the Animal Kingdom is aware by now, WBC attacks persons and groups it deems guilty of sin. Never mind that America’s debauchery has become so business-as-usual that examples of it aren’t even titillating anymore. WBC goes after the decadent with seriousness and vigor, as though by concerted effort they could eventually stamp out the evil among us, one person and one organization at a time. They do this because it’s easy. And fun. What Phelps does requires no prayer, no anointing, no self-denial, no struggle to suppress the flesh and walk in the Spirit. You can take a roomful of brash, unregenerate, foul-mouthed jerks and they’ll be able to accomplish everything Phelps does. And they’ll have the time of their lives while they’re doing it.

I have to pause here and say that I am reluctant to discuss WBC at all. My conviction is that we would all be better off if everyone ignored this group. Not only would this deprive WBC of the press it loves, it would slow the hemorrhaging of credibility the real Christian Church is dealing with precisely because of fruit baskets like Phelps.

However, WBC isn’t being ignored; to the contrary, the press loves to pounce on all its clownish displays as though they were relevant to something other than the peculiar psychosis that is found in Phelps’s neck of Topeka, Kansas.

My question is: Why?

Of course, there is the basic reason that everything entertaining, inflammatory and sensational is junk food for the modern press. Simply put, because Phelps’s bizarre gyrations are fun and easy for the press, too; it’s ready-made copy.

However, there is a deeper reason. The secular press and broader secular America never met a Fred Phelps they didn’t love. Oh, they all abhor what WBC does, its hatred and hypocrisy. But they love 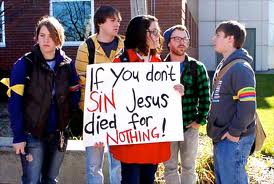 reading about it, and the more the better, because it eases the way for them to dismiss the real Jesus, who is love and mercy personified, calling out to a dying world. For those who are completely unenlightened, Phelps reinforces their belief that Christianity is a vast hoax, invented by social engineers to control the masses and get into their wallets.

Not that there is anything rational about using Phelps’s example to decide what to make of Jesus. No professing Christian I have ever spoken with believes there is any merit to Phelps’s activities. Everyone I know sees the glaring disconnect between WBC’s actions and the message of the Gospel. Even Jennifer O’Dell, a secular journalist, writes, “…last we recalled, the Lord Jesus was saying stuff like, ‘As I have loved you, so must you love one another.’ We totes must have missed the Bible passage where he said, ‘Get thee to a pop concert and call some young woman a “whore.” ’ ”

No, that isn’t Jesus. My Savior would get a backstage pass so he could sit down for a visit with Taylor Swift. He would speak to her with warmth and gentleness. He might not even mention the fornication.

When I was developing my own convictions about Christ and morality as a much younger man, I felt strongly that Christians had an obligation to challenge the moral bankruptcy in American society, particularly since our strong Judeo-Christian heritage once guided us so firmly. Every believer sees the waste and ruin that have resulted from the secularization of American society. For years I dreamed of reversing it.

But Christ can’t be preached through political wrangling. Christians should cease trying to use law and politics to reshape our society in Christ’s image. Our attempt to impose Christian morality on our secular society has been an unqualified failure that has done little except to popularize the caricature of the ugly Christian fundamentalist, out rapping sinners on the head with his Bible instead of feeding the poor and loving his neighbor. We should cast our votes at the ballot box, speak our minds and leave it at that. Let our laws and our government run their corrupt course. We should put our energy into telling others what Jesus has done for us personally; maintaining strong church communities that will be a refuge for believers as well those who don’t yet believe; feeding the hungry; showing the character of Christ to the world. Our society as a whole will never again be shaped by Christian values. We should concentrate on helping those who want to escape the ruin that is overtaking the world rather than arguing with those who don’t.

Phelps, if anything, is just another example of humanity’s condition, for which Christ died. The fruit of Westboro Baptist Church is bitter and supplies no nourishment to the society it claims it wants to save. Our fixation on this group only encourages them. Believers and unbelievers alike should make a point of starving Fred Phelps of the attention he craves. It’s pretty clear the press has gone to his head.

I am a freelance writer by trade, philosopher and comedian by accident of birth. I am an assiduous observer of humanity and endlessly fascinated with people, the common elements that make us human, what motivates people and the fingerprint of God in all of us. I enjoy exploring the universe in my search for meaning, beauty and friendship. My writing is an extension of all these things and something I did for fun long before I ever got paid. My hope is that the reader will find in this portfolio a pleasing and inspiring literary hodgepodge. Good reading!
View all posts by Douglas Abbott →
This entry was posted in Christianity in Politics and tagged condemnation, damnation, debauchery, decadence, evil, forgiveness, fornication, Fred Phelps, God, Gospel, grace, heathen, immorality, Jesus, kindness, love, lust, mercy, patience, politics, press, promiscuity, sexual immorality, sin, Westboro Baptist Church. Bookmark the permalink.