“A baby is God’s opinion that life should go on.”   –Carl Sandburg

I was with a friend this afternoon having one of those relaxed, free-floating Sunday conversations. We got around to discussing the possibility of an outing to an indoor water park at some future date (doing it today would have disrupted Matthew’s standard church-nap-church schedule). I told him that when we did go, there was a possibility my roommate Seth might be able to join us, since his three-year-old son grooves on water slides. Matt perked up immediately and mentioned that he loves being around kids.

His comment was quite unusual, but I realized that I, too, enjoy being around children. What I like best about them, particularly infants, is that they haven’t yet learned how to lie. They do not cover up or even tone down their social expressions. They carry themselves straight on, full-bore through their little worlds, usually entertaining everyone around them. Their intensity is enchanting, the more because you know that what is coming across is totally real. Dostoyevsky said, “the soul is healed by being with children.” It wasn’t until a few years after I read those words that experience proved that the old Russian’s observation was dead-on.

About a year ago, I was working in a crusty little kitchen cleaning up after dinner with the rest of the kitchen crew. For some reason I can’t recall, I was feeling such a heaviness of soul that it was actually producing physical pain in my body. It was a good thing I had a job to keep me busy, because my thoughts were growing bleaker by the minute.

While we were still washing dishes, a close friend of mine named Jason came through the kitchen to introduce his fiancee and their infant daughter to us. Naturally, we paid special attention to his daughter, Bella, who couldn’t have been more than six months old. She was either emerging from or approaching a nap, and her eyes were half-lidded. As she looked around at the roomful of strangers, there was a perplexed curiosity on her face. I was glad when it was my turn for a greeting. 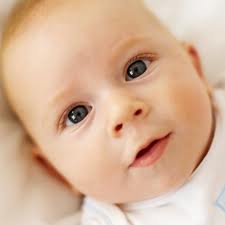 “Hi Bella,” I said as I touched her tiny hand with my index finger. She looked up at me with these great big blue eyes. I was already feeling better because I love little girls (who doesn’t?), but I really started getting energized as I noticed that she was looking intently into my eyes as well. What she saw I don’t know, but she held my gaze for quite a long moment, at least 20-30 seconds. She was seeing something completely new and intensely provocative. As I looked into that little face, full of purity and innocence, I began to feel a sudden strength and joy swell in my chest. The heaviness was gone, and the world began to sparkle again.

I believe the kind of healing I experienced that evening was a sort of wipe-reload. Connecting with Bella re-ignited the battered child inside of me. I was taken back, ever so briefly, to a time when I knew no guile, pride, bitterness or shame. I have often observed that simply growing up doesn’t kill the child inside of us. It is giving up on faith, hope and love that does it. In the absence of tragedy, life is blessedly uncomplicated for children. Days and nights are great feasts of entertainment, food, play and learning. Rather than having to manage life, everything comes to them. They do not naturally wrestle with fear, hopelessness, apathy or condemnation. They do not wring their hands wondering if their needs will be met. They have every expectation that they will grow up to be big and strong, have shining careers, fabulous homes, loving wives and husbands.

Life gets more complicated as we take on responsibility, but I don’t believe we were meant to endure the kind of crushing emotional turmoil so many of us go through. I suspect that as long as there is still breath in our bodies, it is almost impossible to slay the little person inside of us—the one who laughs and cries and hopes for the best. For some of us, that little person is fast asleep, or silent in the fetal position. Maybe there are different ways for wakefulness to return. But as my experience with Bella taught me, just about the most powerful way is spending time with a child. Dostoevsky was right.

I am a freelance writer by trade, philosopher and comedian by accident of birth. I am an assiduous observer of humanity and endlessly fascinated with people, the common elements that make us human, what motivates people and the fingerprint of God in all of us. I enjoy exploring the universe in my search for meaning, beauty and friendship. My writing is an extension of all these things and something I did for fun long before I ever got paid. My hope is that the reader will find in this portfolio a pleasing and inspiring literary hodgepodge. Good reading!
View all posts by Douglas Abbott →
This entry was posted in Renewal and tagged babies, beauty, faith, healing, hope, infants, joy, renewal. Bookmark the permalink.